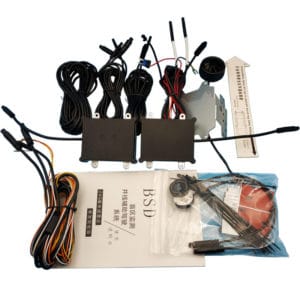 Thank you for choosing the blind area monitoring and the parallel driving assistant system produced by our company. The product consists of two 24Ghz millimeter-wave radars with single and double antennas two indicator lights or a special car blind area rearview mirrors a buzzer and connecting wiring harness.

The products of this system give early warning to dangerous targets in left and right adjacent lanes. This system includes four functions: BSD LCA RCT and AOA. Its unique ability to penetrate smoke fog and dust can be applied all day and all day and the objects in the signal area can be detected in real-time to calculate the velocity angle and relative displacement of 64 objects at the same time.  It can detect targets Within 30M at the farthest and finally output alarm signals, including First-class alarm and second-class alarm.

1 )The system adopts adaptive signal processing and target recognition methods to effectively filter out false alarms caused by low-speed vehicles stationary guardrails trees and other targets in the Monitoring area. However, only the moving target with a speed greater than 1Okm/h will be alarmed.

2) The system adopts multi-channel interference technology to accurately measure the distance speed and angle of the target and does not alarm the targets outside the alarm area such as moving vehicles across lanes.

Approaching following (at the same speed as the own vehicle) and far away.

First-class alarm: the prompt light is always on

A. when the vehicle speed is 0: 4m horizontally and 15m longitudinally.

B. When the vehicle speed is 18-60 km/h: 4 meters horizontal y and 15-20 meters longitudinally increasing or decreasing with the speed.

C. when the vehicle speed is more than 60km/h: 4m in the horizontal direction and 20-30m in the vertical direction increasing or decreasing with the speed.

B. When the vehicle actively surpasses other targets with speed > 10 km/h and turns on the turn signal on the corresponding side in the alarm range a secondary alarm will be generated until the target leaves the detection area and the alarm will be canceled. 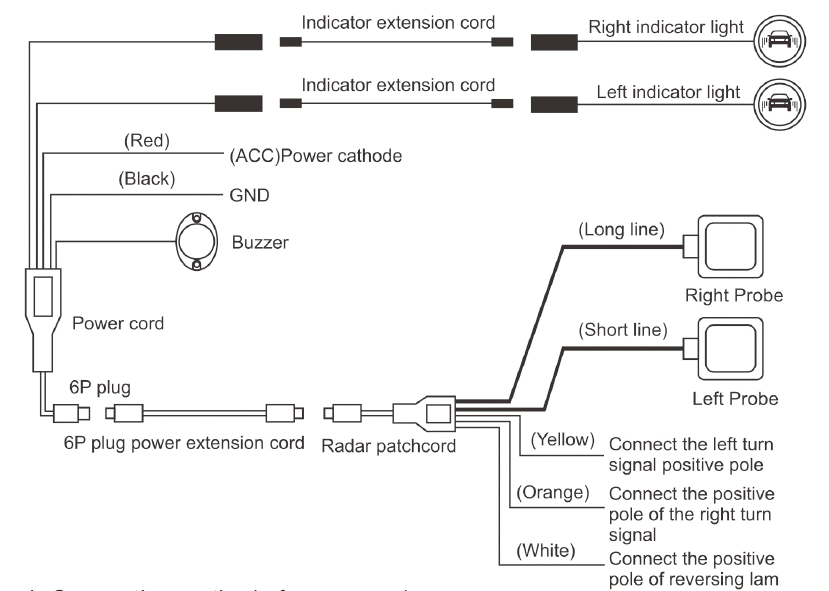 A. Connect the black line of the power cord with the negative pole of the automobile or ground it.

B. Connect the red line of the power cord to the ACC power supply of the car (the car starts normally/shuts down without electricity).

C. The extension line of the prompt lamp and the prompt lamp correspond to each other according to the left and right labels and the male and female are plugged and connected.

A.Plug it into the power extension cord.

C. The radar is plugged into the left and right radar plugs respectively.

D.Connect the yellow wire with the positive pole of the left turn signal of the automobile

E.Connect the orange line with the positive pole of the right turn signal.

F.Connect  the white wire to the positive pole of the reversing lamp.

Two radar heads are installed in the bumper at the left and right corners of the rear end of the car body, as shown in the following figure. Specific

Installation steps are as follows: 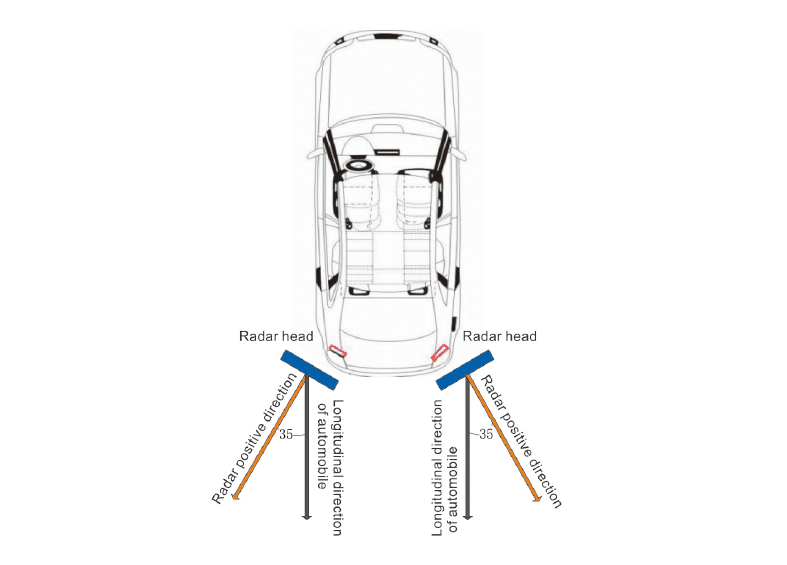 The bracket is installed in the bumper and the appropriate position is selected. The height is best near the middle line of the car height but it must be ensured that there is enough space for installing the radar and the radar is not blocked by any metal (such as a lampshade,anti-collision beamed.)  after the bumper is covered; The position of the bracket should not be too close to the upper and lower edges of the space and the distance from the upper edge should be more than 30 mm; The

bracket can’t sink too deep into the space cavity either. It’s better to make the depth from the radar surface to the cavity opening less than 1Ommas shown in the following figure. Special attention: after the bumper is covered the radar cannot be blocked by the reversing radar on the bumper and the distance between the two is better than 30 mm. 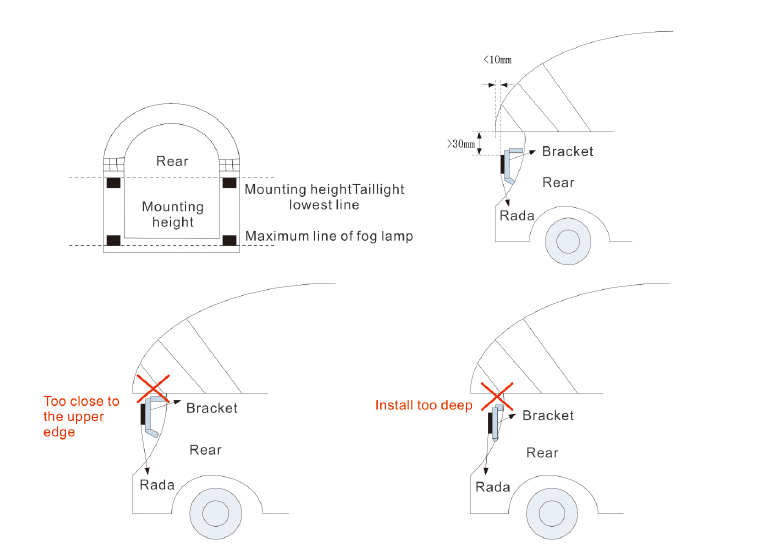 Note: There must be no metal objects in front of the radar head.

1.Under the following circumstances, the radar may not emit the prompt:

A.The vehicle is located at the rear blinkTspotof adjacent lanes and keeps the relative same speed for a long time.

B.The adjacent lanes where the vehicle is located are extremely wide, which exceeds the computation range of radar signal.

C.When driving through the hills or top of hill roads.

2.If the roads are narrow it is possible to detect the vehicles of two lanes.

3.The pre-warning signal lamp of this system may be turned on to the Stationary objects on the road or roadside.